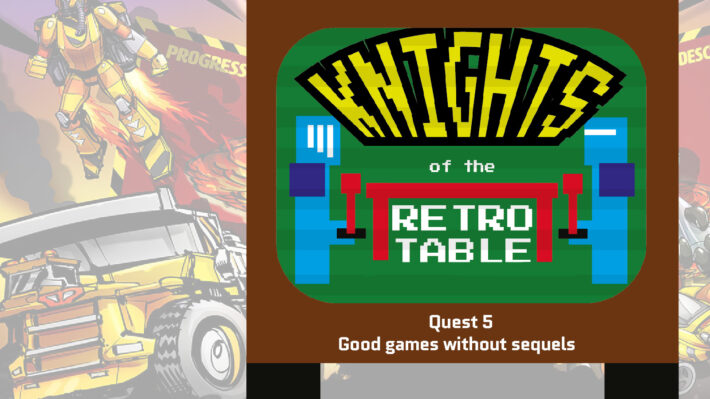 Of which we would like to see one or two.

In this quest, Peter “Retrogamepapa” Scheffer talks with Michiel Kroder about good video games that never got a sequel. There aren’t that many lonely games out there which don’t suck. Some very good Rare games didnt get a sequel for example. Michiel has just two, but Peter has a lot more. And how would we like the sequel to play and be different? The two knights also namedrop a few games without sequels of which they also think don’t need a sequel. Next to this main topic Michiel and Peter also talk about the latest games they’ve played, bought and on a sidenote Peter also starts about Transformer toys again.

In the Entrance part we talk about: Doom Eternal, Doom (2016), Bayonetta gameseries (mainly about 1 and 3), The Mummy (PS1 game) and how terrible of an experience it was to obtain the Xenoblade Chronicles 3 Collector’s Edition. In the Jousting: Dangun Feveron (PS4) and Megaman X Collection (Gamecube).

Retrogamepapa’s Addendum: This was a nice weird little premise and topic to think about. Most games get sequels, even unlikely ones. After the recordings many more popped in my head, because I personally didn’t think at all about the vast amount of great PC games out there without sequels. There are also a loads of games who didnt need sequels, but still got them. That’s perhaps a nice sequel to touch upon in another podcast quest!

My Dutch review of Fade to Silence on this website: https://www.retrogamepapa.nl/game-reviews/new-game-review/fade-to-silence/

In this Dutch Knights episode we also touch upon the amazing music of the Megaman X series: https://www.retrogamepapa.nl/podcast/queeste-36-favoriete-gamemuziek/

Other places to listen to the podcast